On May 11th, 2022, Mr. Wright addressed the Marshall County, Alabama Commission on the unconstitutionality of the county picketing resolution. Read the non-verbatim text of my speech.

I attended Justice for Travis Banks protests in Guntersville, Alabama seeking justice and answers for the family on his death in Guntersville Police custody.

I addressed the Guntersville City Council in Alabama in a two minute speech regarding the anti-LGBT shirt posted to social media by a city councilman.

I attended a Take Down The Confederate Monuments protest in Albertville, Alabama at the Marshall County Courthouse 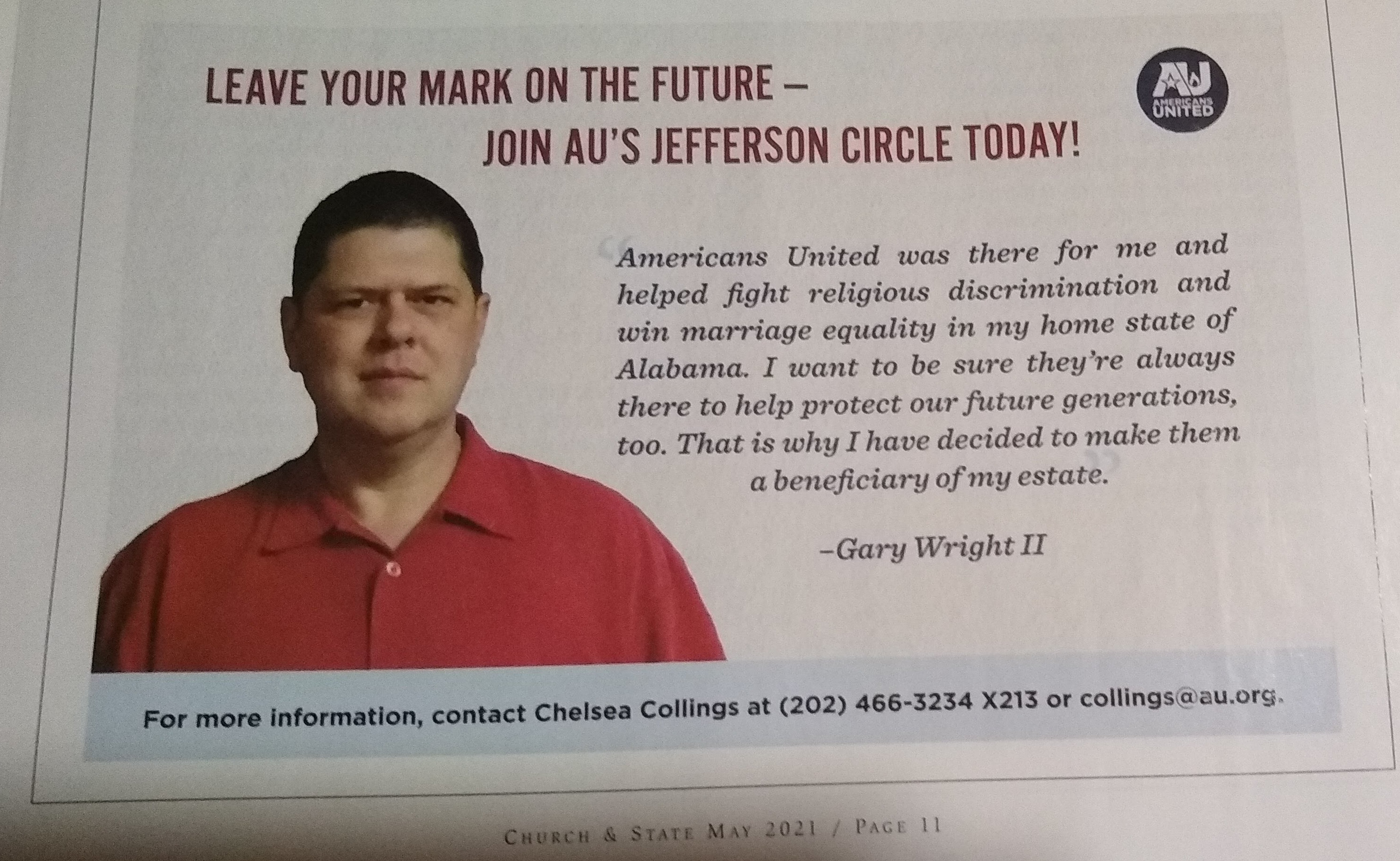 On Friday, July 12th, 2019, I attended the Lights for Liberty Vigil in Huntsville, Alabama to close the concentration camps and stop putting immigrant kids in cages. The video of the event is posted on my YouTube channel.

I was unable to march because of my disabilities, but I attended the 2019 Rocket City Pride Parade in Huntsville, Alabama and here's video of the parade.

Read my op-ed posted at BamaPolitics.com on the importance of LGBTQ visibility after Alabama Public Television refused to air an episode of the children's cartoon Arthur that featured a same-sex marriage.

Read my interview in the American Bar Association Journal regarding the elimination of marriage licenses in Alabama.

Gary is currently working on writing a screenplay and book about the struggle for equality in the South. Visit his Pride Against Prejudice project for a collection of online resources for LGBTs, their parents, families, and friends.

Gary was a Named Plaintiff in the historic Alabama Strawser v. Strange class action lawsuit which won marriage equality statewide, struck down sections of the Alabama Constitution as discriminatory, and obtained a permanent injunction against the State.

Gary testified at the Alabama Senate Judiciary Hearing against the 2015 HB56 Marriage RFRA.

In Huntsville, Alabama, Gary was awarded a CommUNITY Award at the 2015 Rocket City Pride Festival.

Gary is a proud ally and supporter of the Franklin County High School (FCHS) Gay - Straight Alliance (GSA) in Winchester, Tennessee. See my activism page for video and transcripts.

Not related to the musician famous for Dream Weaver, Gary Wright II was the guitarist and founder of the 80's rock band Struggler™.

Mr. Wright is currently working on a new Struggler album entitled Resurrection that will be the soundtrack for his limited series Pride Against Prejudice.