I have been completely overwhelmed by the love and unity shown this weekend at the Equality March. People from across America, and from every corner of our world stood united to demand their equal rights.

I posted the complete text of Obama's speech on my blog: Obama HRC Speech 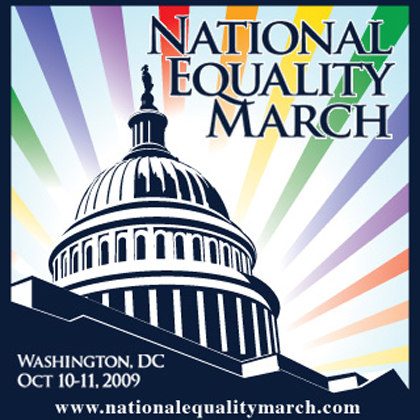 Here is a recap of the speeches and events of the day:

Kim Coco Iwamoto said, "The question of nature vs. nurture should be directed towards bigotry. Are bigots born that way, or is it by their environment?"

Scott McCoy said, "If you are against gay marriage - then don't have one!"

The Equality Across America banner was blue, white, and HUGE!

Lady GaGa said it was the single most important moment of her life and her generation will change the world. She then said, "Obama, I know you are listening", then screams "Are you listening!!!???!" Lesbians from horizon to horizon carried signs that say, "Gay for GaGa"

British Billie Myers, "I am here because my nationality doesn't trump my sexuality." "I am bisexual and I am fucking proud of it!" "Today, we are on the right side of history." "America the Beautiful was written by a lesbian who lived with her partner for 25 years." Dave Koz on saxophone performed America the Beautiful

Derek Washington, "Today you and I woke up as new people."

Angela Green gave HIV infection rates which were very shocking. See CDC for numbers? "If you want others to see us as equal, we must see ourselves as equal." When you sit back and remain silent, it is indicative that you agree and that you approve their nonsense agenda. They want to kick the sissies out of church, but they keep the whores on the board."

Charles King gave more shocking HIV numbers and told of the conditions facing those infected. "The end of AIDS is not an unrealistic vision"

Actress Michelle Clunie from Queer as folk said, "This is not a gay rights movement, it is a civil rights movement, this is a human rights movement, this is our generations movement. We are all created in the image of god, we all come from the same source." Susan B Anthony was a lesbian that inspired... We gathered not because we are different, but because we are the same. We are all Americans, and because we all believe in the audacity of hope. "We work to create an american that lives up to the creeds under which it was established." Reminded the youth that "Struggle is a never ending process, freedom is never really won but earned with every generation - Coretta Scott King"

Stacy Ann Chin - spoken word artist from Jamaica rallied the crowd to make some noise. "Change is not only possible, it is inevitable. Equality has to be more than a word... it has to be a given. The future must become a door that we can all walk through. What makes us human is the belief in a universal humanity. The halls of freedom beckon to all those who hear and to all of those to bear witness to its reckoning. When every family that is united by love becomes covered by equality under the law. What we want is equality."

Maxim Thorne -"The MLK of the gay movement, is MLK!" and introduced NAACP Chairmain Julian Bond.

Julian Bond - "Gay rights ARE civil rights! Coretta Scott King said Homophobia is like racism, as it seeks to dehumanize a large group people of their humanity. We have some real and serious problems to face, since when did we believe that trust, love, and loyalty is not a good thing? The people of color should be flattered that their movement has been an inspiration for others. Just as you stood with me then, I am proud to be standing with you now. Dr. Martin Luther King, Jr. said that Nothing in the world is more dangerous that sincere ignorance and conscientious stupidity. Rights do not come to those that wait, they come to those that agitate. 46 years ago we stood together at the opposite end of this field. There is no room for injustice anywhere in the American dream."

Sign that says California: Chickens got rights - Gays got plucked

Kate Clinton - "We've got homo-mentum. Homophobia is a choice. Divorce should be a felony, and felons aren't allowed to vote. Tax the church."

Urvashi Vaid - we endured two decades of a fake economy that like a casino gambles with its money.

Tanner Efinger who Founded postcards to the President said, "we must go home and organize - today is just the first step for action."

Cleve Jones (Co-Chairman of National Equality March) - Land was sacred to natives, yet a whole range of people came here for the dream. We had 8 years where another democratic president came to our parties, took our checks, and all we got from Clinton was Don't Ask, Don't Tell. Our Constitution promises all of us "equal protection under the law"

Dustin Lance Black screenwriter of movie Milk (Harvey Milk)- "We must look to our history if we want to achieve our future. We demand that the government uphold the rights guaranteed by our Constitution, the Declaration of Independence, and Bill of Rights.

Michael Huffington a former Republican Representative from California said, "This is another huge step in the long march towards equality. President - now is the time to deliver!"

Sherry Wolf author of "Sexuality & Socialism"- I am a socialist!

Nicole Murray-Ramirez - "We spend billions of dollars searching for life on Mars, yet we are losing so many lives here on Earth. When a gay soldier serving in silence gives his life for our country, his blood is not pink or lavender - it is crimson red. We must also march to the voting booths. Our youth are not our future - they are our here and now. The torch has been passed to the youth and you must fulfill the dream."

Jarrett Barrios from GLAAD - "The road to equality doesn't begin here, it begins in far more humble places than on Capitol Hill. In the plain unspoken places, it is our story that we tell about our lives. Our equality is born at water-coolers, playgrounds, and baseball diamonds. We must let them know what are struggles are and make them understand. It is our own stories told to those who need to know that will fulfill the promise of our dreams. Not a campaign pledge or a speech by a President but in every living room. We love and respect every one, and we expect the same in return. America is a never ending journey towards greater inclusion and progress."

Christine Chavez - Her grandfather was Cesar Chavez ("Yes We Can!") who demonstrated for equality. She gave a complete list of "what are you tired of?" detailing all the issues.

Robin McGehee gave very touching personal message to President Obama. "This is not a cliffs notes test on what you know about our LGBT struggles."

Irene Andrews of Congressional District Action Team and a special needs school teacher in Texas- "I am here today because I reached out for equality in American and they reached back to me - right where I live. Our sense of isolation must not keep us silent. Partner of 25 years want to get married. We make a difference one courageous act at a time. I am not alone!"

Alana Smith (CDAT) from Maine - brought forty busloads of people to the rally. An enthusiastic "Fucking Bullshit!" was yelled from the audience, and Alana shouted, "Yeah! It's fucking bullshit!"

John ? - CDAT from Wyoming? "Get busy getting equal!"

Chloe Noble founded Homeless Youth Pride Walk - homeless youth epidemic where 40% are gay. "We are marching as valiant warriors, yet born into a world that still hates. We have suffered in the shadows of fear for far too long."

Kit Yan a transgendered spoken word artist struggles to find the courage to tell these stories.

Bert Coleman - cofounder of LIFEbeat music industry that fights AIDS. A CD is available with music from the march.

Julie Clark performed song "Courage of our Conviction" and said, "Nothing less of equal is good enough."

My final quote is one of my own: "The President's speech was great, but until those words turn into actions - that is all it was... Just a speech. I was part of the 1993 march in DC. Sixteen years have passed, and yet nothing has changed."

Thank you for all of your love and support!