On Sunday, March 20th, 2011 activists around the world held peaceful demonstrations to show their support for Army Private First Class Bradley Manning. I was not able to attend any of these events in person, and I am very grateful to those who shared photos and streamed live video of the event on the Internet (thank you Fire Dog Lake). Although every supporter and every rally is very important, rallies held at two locations held special significance. First, was a rally held in Wales where Bradley's mother and some of his family live. The second was held at the gates of the Quantico Marine base in Virginia where Manning is being tortured and held in solitary confinement.

Organizers for the Quantico demonstration had negotiated for permission to hold the rally and to honor the sacrifices made by our troops by placing flowers at the base of the Iwo Jima monument. The monument is open to the public every day of the year, but on the day of the demonstration officials broke their promise and restricted all public access to the monument.

By 2PM hundreds of people had arrived at Quantico to show their support for PFC Bradley Manning. The rally started with short speeches by Daniel Ellsberg (leaker of the Pentagon Papers which led to the end of the Vietnam war), Colonel Ann Wright (a retired army colonel), Jeff Paterson (Courage to Resist), Zach Choate (Iraq Veterans Against the War), and David House (a friend of Bradley Manning who visits him regularly). All of the speeches were inspirational, but a very emotional moment for me was when Zach Choate (a Purple Heart recipient) ripped the medals off his chest and said, "These ribbons mean nothing to me any more."

After the speeches, the group held a silent and very somber march to the gates of the base to lay flowers at the Iwo Jima memorial. Despite obtaining prior permission, the police only allowed six people to carry the flowers and they were denied access to the memorial. They were forced to leave the flowers at a barricade approximately 30 yards away from the monument. 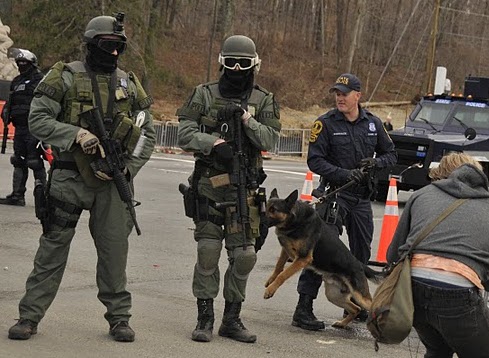 There was an overwhelming and very intimidating police presence in full riot gear, many with machine guns and attack dogs. I am glad the police were prepared for anything that may happen, but the show of force seemed a little extreme.

The orange circles you see on the riot shields are Free Bradley Manning stickers. A brave little old lady went up and down the police line slapping those stickers on them.

As the police line advanced, a hole would open up to allow them to snatch up somebody and arrest them. I couldn't figure out why they chose to arrest some people, but not others. I saw no protesters misbehaving or breaking any laws. It seemed like anyone was being vocal got arrested. Many of the protesters were elderly and the people near the police line begged them to stop pushing. They even arrested an elderly blind man (see photo)!

If a picture can say a thousand words, a video can say a million. Many people have posted their photos and videos on the Internet. This YouTube.com video covers most of the rally and about six minutes into it you can see the police actions for yourself. In addition to YouTube videos, you can also search Twitter with the #ManningMedia hash tag.

For every person who participated, there are thousands of us who support Manning but weren't able to attend a rally. Rallies were held around the world and Manning will eventually hear how the world demands his release.

There are lots of people out there who want Manning to be put to death. Most of those people have only heard that he allegedly leaked classified information. When I made several skeptics watch the murder video at CollateralMurder.com they ALL changed their opinion and now support Bradley Manning.

PFC Bradley Manning has sacrificed his life so the world could hear the truth. We owe it to Bradley to be sure the whole world hears it!