Let's not lose another child because of a bully! 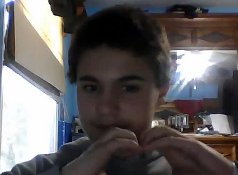 Last weekend, 14 year old Jamey Rodemeyer committed suicide after being bullied for being gay. Despite a nationwide campaign to stop bullying, we are still losing far too many kids to suicide.

I don't understand how or why we lost Jamey. Jamey was a kid that had understood the message of hope. In a video Jamey talks of being bullied, but also says how he had developed a system of support. How did we still lose him???

The past days I've spent reflecting, crying, and yelling. I have so much anger. It is hard to feel love when cruelty takes someones life. Jamey Rodemeyer, 14 yrs old, took his life because of bullying.Watch Video. Bullying must become be illegal. It is a hate crime. am meeting with our President. I will not stop fighting. This must end. Our generation has the power to end it. Trend it #MakeALawForJamey

Thousands of celebrities have gotten involved in the It Gets Better project, but you don't have to be famous to participate. Take the pledge and upload your own video today!

If you are considering hurting yourself or need help, call the Trevor Project 866-4-U-TREVOR (866-488-7386) or visit TrevorProject.org

Being cruel isn't being cool!

Every human being is special, has talent, and is beautiful in their own way.

I've organized a comprehensive list of online resources for gays and lesbians.