I try to stay away from politics as much as possible, but I can no longer remain silent about the upcoming presidential election.

Let's start with Mitt Romney and his background. His father George W. Romney (Ugh! another George W!?!) was born in Mexico. He was the president and chairman of the board of American Motors from 1954 to 1962. He retired from American Motors to enter politics and served as the Governor of Michigan from 1963 to 1969. He aspired to be a US President, but was deemed un-electable after he made a statement saying he had been brainwashed into supporting the Vietnam War.

Mitt Romney was born into a wealthy and influential family where he lived a privileged life and had a chance to attend top schools like Stanford, Brigham Young, and Harvard. He got his MBA at Harvard Business School and his JD at Harvard Law School. In 1984, he co-founded Bain Capital which was an investment firm that grew to own numerous well-known companies such as Domino's Pizza, Staples, Sports Authority, FTD, Brookstone, and Bright Horizons to name a few. From 1986 to 2002, he served as a member of the board of several of those companies (Staples, Sports Authority, and Marriott).

He touts his work on the Salt Lake City Olympics, but never mentions that an investigation found that the top officials bidding for the 2002 Winter Olympics had paid over $1 million in bribes to two dozen members of the International Olympic Committee (IOC). Many claims have been made that the judging of the events were also rigged through bribes.

Using his position with the Olympics as a spring board, he entered the political arena and became the Governor of Massachusetts in 2003. This is where is wishy-washy ethical standards first started coming to light. His political history is full of dichotomy and, whenever convenient, shifting positions on the issues. This is especially true whenever he tries to win over the votes of conservatives.

He has taken a hard stance against illegal immigration, even though his own grandfather entered the US as an illegal immigrant. His great-grandfather was a polygamist and fled the country with all of his wives when in 1884 laws were passed to strip polygimists of their right to vote and other rights. Mitt's father and grandfather were born and raised in Mexico. The family returned to America during the Mexican Revolution. His father and grandmother were US citizens and returned to the country by train, while his grandfather snuck in illegally by crossing the American / Mexican border.

When he ran for Senate in 1994, he called for strict gun control laws, yet in 2006 he joined the National Rifle Association (NRA).

Although Mormans believe it is okay to have multiple wives, Mitt is against same-sex marriage. When it was legalized by the judicial action of the the Massachusetts State Supreme Court, Romney responding by enforcing an old law on the books that prohibited interracial marriage. A clause in the law doesn't allow non-residents to get married if the marriage is illegal in their home states. His own state determined same sex marriage should be legal, yet he defies their ruling by using another should-be-illegal law as a "workaround."

Another puzzling position is his stance against stem cell research. This is especially troubling because his wife Ann has multiple sclerosis (MS). She uses alternative medicine practices to treat her disease, while being denied the benefits of scientific medical advances because of her husbands political "ethics." If she was my wife, I would fight to get her every treatment possible. Is this not a big deal to him because under his principles he can just go out and get other wives to replace her?

Almost all politicians are crooks, but this guy can't even stick to his own script. He keeps attacking President Obama on the economy, yet the Republicans had no problem starting two illegal wars that were completely unfunded. So, there is no limit on what we spend to destroy other countries, but we are criticized when we spend money rebuilding our own country? Do Americans have such a short attention span that they forget that it was the Republican leaders who mostly caused this financial mess?

Our country is already circling the drain, and if Romney wins it will only accelerate our decline and increase the suffering among our most vulnerable citizens.

Recently, Twitter suggested I "follow" Mitt Romney. I'm not that fucking stupid, and I hope that the majority of Americans aren't that stupid either.

Update 9/1/2012: Another epic failure of the Twitter suggestion algorithm: 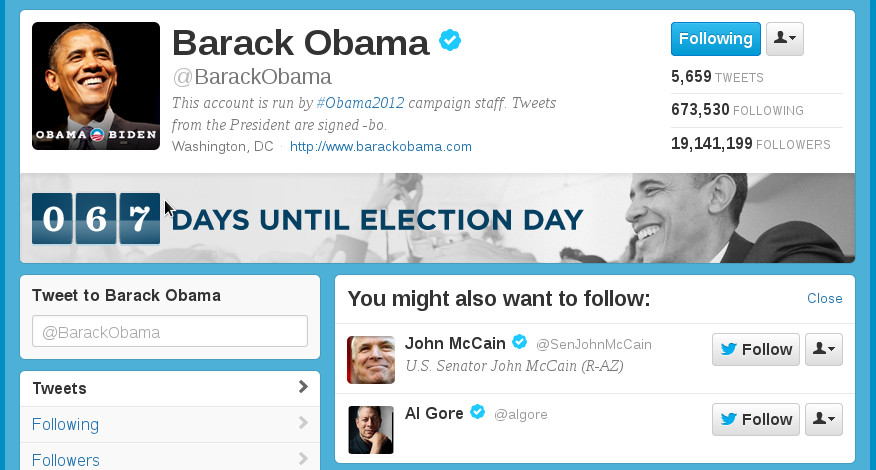