The first step to understanding the situation, is to look at the sources of income. 68.79% of CNO income is from Operating Grants & Contributions, 16.44% Charges from Services, 6.29% from Dividends, and 5.1% from Taxes. To be truly free, they must replace the near 70% of their income from other sources. I'd like to see them increase their income from services and offset the money from the federal government. What if one day the US was broke and cut off all of their funds? The tribe would collapse almost immediately. The dividend income isn't bad considering the economy. More revenue should come from taxes, but don't raise the taxes. Raise the employment numbers and that will also raise more revenue derived from taxation. 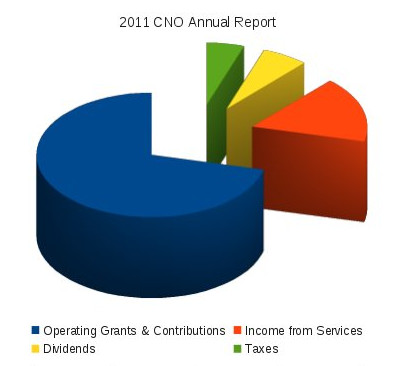 Next, we must examine where the money goes. 50.9% goes to Health Care, 7.37% is the cost of tribal government, 18.68% goes to Community Services, 13.36% to Education, 9.37% for Human Services. The interest on long term debt is only 0.32%, which isn't bad - but it may be worth the effort to negotiate a better rate. The cost of tribal government may be trimmed a little, but still not bad when compared to other governments. I would like to see them cut health care expenses by half and double the amount spent on education. The CNO operates the largest tribal health care system, but to spend over half it's expenses on health care is not a good thing. They have to reign in those costs without sacrificing the health of the citizens. Much more should be spent on preventing disease, diagnostics to catch disease processes early, and smoking cessation efforts. The bad news is that currently the costs of health care is soaring. 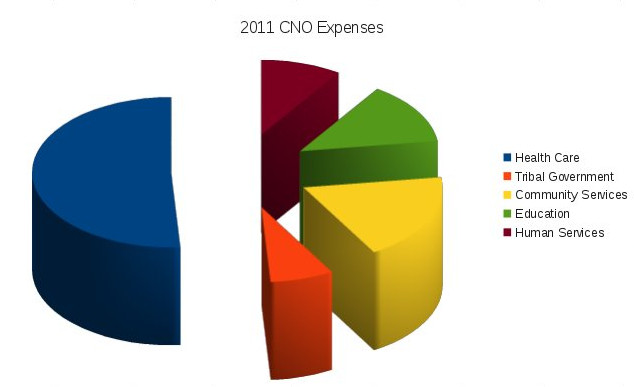 Providing quality health care is useless if you stick a healthy person in an unhealthy environment. Look at the costs of clean water and sanitation.

The number of health care visits is growing at an unacceptable rate. It's good more people are seeing a doctor, but bad if you are seeing a huge decline in the health of your society.

Next, look at the amount spent on health care. As you can see, this is a very bad situation and there is no way they can stay on this path.

Finally, we must realize that during times of great turmoil, there can also be great opportunities. It isn't too late to save the tribes, but they can't be saved if they carry on with the status quo. Why do I get the feeling that in the very near future, the tribes will deeply regret the way they have treated us? There are so many people who genuinely care about our people, and most of those don't live on a reservation. If the tribes don't seek help from ALL of it's people and resources - they will never make it. I just hope they wake up before it is too late to help them!

On November 25th, 1836, Cherokee Elias Boudinot predicted the outcome, and I've made it a life goal to prove him wrong. Regrettably, I have failed:

"The time will come... when the few remnants of our once happy and improving Nation will be viewed by posterity with curious and gazing interest as relics of a brave and noble race... Perhaps, only here and there a solitary being, walking, 'as a ghost over the ashes of his fathers,' to remind a stranger that such a race once existed."