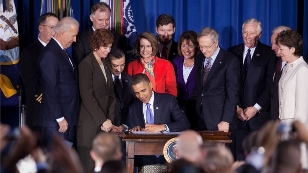 A year ago President Obama signed into law the repeal of the discriminatory military policy of Don't Ask, Don't Tell. I never planned on becoming an gay rights activist, but in 1995 I became a victim of DADT, and it took me on a 17 year long legal battle. The Republicans are trying to undo all of that progress, and it's time we throw all of those old crusty white fuckers out on their asses and clean up our congress. They are all so corrupt and they actually believe that they are untouchable.

I'm hoping the youth of our country will pick up where I left off, and continue pushing our country forward. If you ignore the media and look at all of the facts, the upcoming election should be an easy decision.

I want to share with you just one personal example of the serious damage they are doing, and how so many of them think they are above the law. Before DADT was repealed, the government had lost the court battle, and if it hadn't been repealed in an orderly fashion, the courts would have forced the change abruptly. I saw this as a chance for our leaders to stand on the right side of history, so I asked my senators to man up and start following the law. I want you to compare the response from President Obama versus the words of Alabama Senator Shelby:

Thank you for sharing your thoughts with me. I appreciate your perspective.

Every American deserves equal protection under our laws, and neither Federal nor state law should discriminate against any American. The issue of Lesbian, Gay, Bisexual, and Transgender (LGBT) rights has all too often been used to divide our country. We must treat all of our citizens with dignity and respect, and stand united in our protection of equality -- a founding principle of our Nation and a moral imperative.

I continue to oppose a Constitutional ban on same-sex marriage and support the repeal of the Defense of Marriage Act. We must also extend the over 1,100 Federal marital rights and benefits to same-sex couples, because every American should be able to visit a loved one in the hospital, transfer property, and receive equal health insurance and other employment benefits.

My Administration is committed to addressing a full spectrum of issues important to the LGBT community. We can reduce discrimination by strengthening hate crimes statutes; supporting the Employment Non-Discrimination Act; ensuring adoption rights for all couples and individuals, regardless of their sexual orientation; and opposing discrimination in public accommodations. To combat HIV/AIDS, we need policies that support people living with this illness and increased funding for prevention, care, and research. I also support repealing the current Don't Ask, Don't Tell policy in a sensible way that strengthens our Armed Forces and our national security. Please join me online to learn more about my civil rights agenda at: www.whitehouse.gov/agenda/civil_rights.

Together, we can create a more open and tolerant society that protects and values all people. Thank you again for writing.

I've posted an actual image of the response I got from my Republican senator because I want you to see it for yourself: 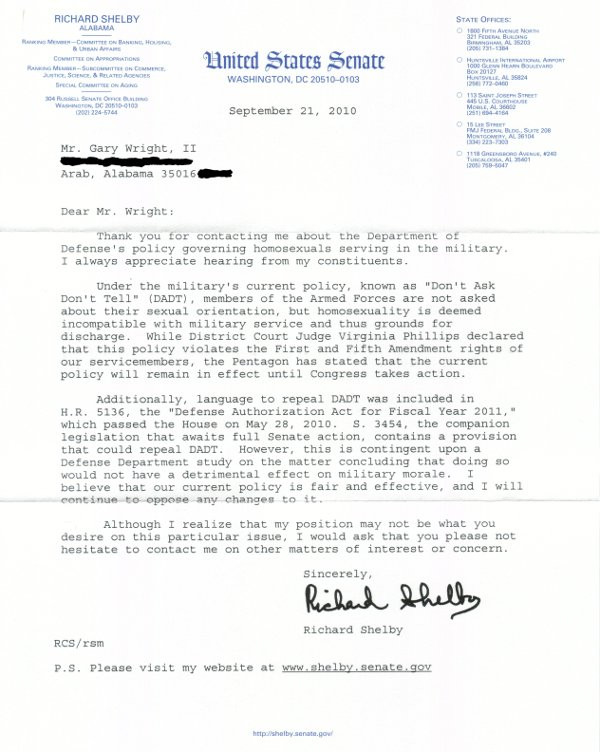 Please join me in the fight for equality for all Americans, not preference just for those who make million dollar campaign donations to all of these corrupt lawmakers. I'm proud to call Barack Obama MY President and I have a very long list of his accomplishments. He has made real progress, despite the outrageous obstructionism from a group that cares more about making Obama fail, than letting their fellow citizens succeed. This whole time they've shown no leadership, and while they've been playing politics, our country is crashing down around us.

Our country didn't get in financial trouble overnight, and it will take a long time for our nation to recover. If you've ever tried to pay down a credit card bill - you know exactly what I'm talking about!

We can't afford to waste another four years by letting Mitt Romney and his rich cronies take over the country. This isn't a partisan issue, and both the Democrats and Republicans share some of the blame. But as I said, this should be an easy decision for you on election day!

I hope to see you at the polls!